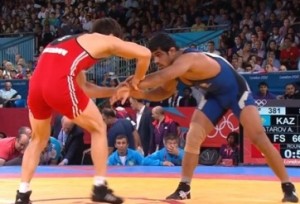 Wrestling in ancient Olympics goes way back to 708 BC and has even been documented as a sport in cave drawings going back as far as 3000 BC. Freestyle Wrestling was added to modern Olympics in 1904 and differs from Greco Roman Wrestling, in allowing the wrestlers to push with their legs, be able to lift and trip their opponent and also to hold their opponents above or below the waist.

Olympic Freestyle Wrestling is governed by The International Federation of Associated Wrestling Styles (FILA), which was founded in 1905.

In 2000 there was a reduction in the number of weight classes in wrestling events, which then allowed the introduction of women’s events in 2004. Competitors are matched in weight classes (see below) and follow a knockout format to reach the final. Matches consist of 3 x 2 minute rounds. A match is won when one competitor wins 2 out of the 3 rounds with points scored/lost from takedowns, submissions, holds/locks, reversals, exposure, penalties and infringements.

Clinch – An overtime period that takes place when no score has been made in full time.

Danger position – When the competitors back is at less than a right angle on the mat.

Default – When a win is awarded if an opponent is disqualified or unable to continue and doesn’t turn up for their bout.

Fall (also known a Pin) – When a competitors shoulders are forced to touch the mat.

Open – When the referee gives a command for a competitor to change their position and adopt more open tactic.

Reversal – When a controlled opponent gets control over the other opponent from a defensive position.

Souple (supplex) – Where you lift your opponent in a body lock from behind or straddling a leg. You then bend your knees and pop your hips into them, lifting your opponent off the ground while you arch your back as you throw your opponent over and behind you slamming their shoulders to the mat.

Takedown – When an opponent is taken down from a standing/neutral position to the ground (the points awarded vary depending on the type of takedown employed).