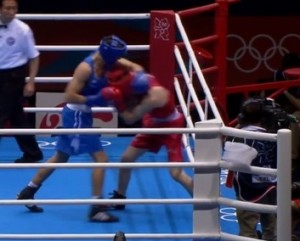 Man has been boxing for thousands of years (see main boxing article here). Olympic boxing was part of the ancient Greek Olympic games in the later stages of the 7th century BC. Olympic Boxing is governed by The Association Internationale de Boxe Amateur (AIBA), now known as The Association Internationale de Boxe (AIBA – still keeps the A at the end of the abbreviation).

In modern Olympics it wasn’t introduced until the 1904 St. Louis, Missouri, USA Games. This was because Athens had deemed boxing too dangerous. It has been at every Olympic games since, with the exception of the 1912 Stockholm games, due to it not being a legal sport in Sweden at the time.

Olympic boxers need to qualify through regional qualifying tournaments and are paired in no particular order, however they are divided into weight classes (see below). Men’s boxing rounds are 3 x 3 minute rounds, while women’s are 4 x 2 minute rounds. There is a referee in the ring with 5 judges at the side of the ring, who award scoring points.

Belt-line – An imaginary line from the navel to the top of the hips, below which opposing boxers are not allowed to hit.

Break – A referee’s order for boxers to step back and separate if they are in a clinch.

Caution – What a referee gives a boxer for an infringement. 3 cautions gets an automatic warning.

Clinch – This is when a boxer/boxers hold on to each other to make it difficult to get punched. Holds are similar, but can include holding the other boxers arms.

Count – Where the referee counts up to 10 when a boxer is knocked down A knockout is declared if the boxer can’t get to their feet before the 10 count.

Foul – An illegal move, such as hitting below the belt or holding.

Knockout – Where a boxer fails to get back up during a 10 count and is also said to be ‘out for the count’.

Mandatory eight-count – Is an 8 second count from when a downed boxer gets back to his feet. This allows the referee time to access if the boxer can continue.

RSC/RSCH (referee stops the contest) – Where the referee discontinues the bout if a boxer is deemed to be out matched (outclassed) or is unfit to continue.

Saved by the bell – When a boxer is being counted out, but it’s the end of the round before they are counted out (only in the final round of the final at the Olympic Games).

Scoring hit – Where points are given for a clean hit in the target area’s.

Throw in the towel – where the corner throws in the towel to end the fight, if they feel their fighter is no longer able to continue fighting or being out matched.

Warning – A notice from the referee when a boxer has committed a rule infringement. 3 warnings will get the boxer disqualified.